Why Practice Actually Makes Perfect: How to Rewire Your Brain for Better Performance

Why Practice Actually Makes Perfect:
How to Rewire Your Brain for Better Performance

Growing up, we all heard the expression “practice makes perfect” from our high school coach/music teacher. Then Malcolm Gladwell went on to popularize the research that expertise developed over “10,000 hours” of deliberate practice. But how does that really work?
In this post, I’ll share what science knows about learning and how special type of brain tissue called myelin, plays a key role in helping us acquire and master skills.

Learning Rewires Our Brains
When we learn a new skill, whether it’s programming in Ruby on Rails, providing customer support over the phone, playing chess, or doing a cartwheel, we are changing how your brain is wired on a deep level. Science has shown us that the brain is incredibly plastic – meaning it does not “harden” at age 25 and stay solid for the rest of our lives. While certain things, especially language, are more easily learned by children than adults, we have plenty of evidence that even older adults can see real transformations in their neurocircuitry.

But how does that really work? Well, in order to perform any kind of task, we have to activate various portions of our brain. We talked about this in the context of language learning, experiencing happiness and exercising and food before. In this context, to give a good presentation, our brains coordinate a complex set of actions involving our motor function, visual and audio processing, verbal language skills and more. At first, the presentation might feel stiff and awkward. We might forget some of our points or flub an important phrase. But as we practice, it gets smoother and feels more natural and comfortable.
What our practice is actually doing is helping the brain optimize for this set of coordinated activities, through a process called myelination.

A little neuroscience 101 here: neurons are the basic cellular building blocks of the brain. A neuron is made up of dendrites, which receives signals from other neurons, the cell body, which processes those signals and the axon, a long “cable” that reaches out and interacts with other neuron’s dendrites. When different parts of the brain communicate and coordinate with each other, they send nerve impulses, which are electrical charges that travel down the axon of a neuron, eventually reaching the next neuron in the chain.
Imagine a row of dominos stacked closely together – when a neuron fires, it is like knocking down the first domino in a long chain. This process repeats from neuron to neuron, until the nerve signals reach their destination. These firings happen at incredibly fast speeds, which is why your friends are able to “Like” your witty Facebook status update less than a second after you post it.
How Myelination Affects Nerve Impulses
We sometimes refer to our brains as “grey matter” because from the outside, the brain looks mostly grey – that’s what color our neuron cell bodies appear as. But there is also a lot of “white matter” in our brains that fills nearly 50% of our brains.
That white stuff is myelin, a fatty tissue that covers much of the long axons that extend out of our neurons. Scientists have found that myelination increases the speed and strength of the nerve impulses by forcing the electrical charge to jump across the myelin sheath to the next open spot on the axon. [2]

In other words, myelin turns the electrical signal into the brain version of Night crawler, the teleporting X-Man. Instead of travelling in a straight line down the axon, the charge is BAMF-ing down at much faster speeds.
Practice Increased Neural Activity Causes the Growth of Myelin
Ok, so how do we get myelin onto our nerve axons?
Well, first off, a lot of myelination happens naturally, much of it during childhood. Kids are like myelin generating machines, soaking up information about the world and themselves. As we get older, we can continue to generate more myelin onto our axons, but it happens at a slower rate and requires more effort.
Scientists believe that two non-neuron (or “glial” cells that exist in the brain, play a role in creating new myelin. The first is a glial cell called an astrocyte. Astrocytes monitor neuron axons for activity, and lots of repeat signals from a particular axon triggers the astrocyte to release chemicals that stimulate the second cell, known as oligodendrocytes, to produce myelin, which wraps around the axon. [3]

So as we practice, whether by writing new blog posts every week, hitting forehands at the courts or going for the headshot in Call of Duty, we trigger a pattern of electrical signals through our neurons. Over time, that triggers the glial cell duo to myelinate those axons, increasing the speed and strength of the signal. Like going from dial-up to broadband. This pattern of neurons travelling the s

Myelinated Neurons Perform Better
There’s one final point to make here – how do we know myelin improves performance?
Well, that’s tough to prove definitively. We can tell for sure that increases the speed and strength of the nerve impulse – which seems helpful for learning, but not conclusive. However, we can’t just cut into people’s brains and look for myelin directly without running afoul whole bunch of ethical and legal issues.
One compelling piece of evidence comes from brain scans of expert musicians. There’s been a lot of research done on how musician brains differ from the brains of ordinary people – and one specific study used a particular brain scan called Diffusion MRI, which gives us information about tissues and fibers inside the scan region in an non-invasive way. 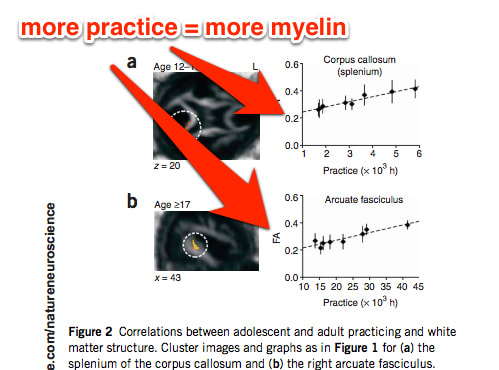 The study suggested that the estimated amount of practice an expert piano player did in childhood and adolescence, was correlated with the white matter density in regions of the brain related to finger motor skills, visual and auditory processing centers, and others — compared to regular people. And most significantly was that there was a directly correlation between how many hours they practiced and how dense their white/myelin matter was. [4]
Another strong point in favor of myelin’s performance-enhancing abilities is what happens when it is missing. Demyelination is a known factor in multiple sclerosis and certain other neurodegenerative diseases which cause symptoms such as loss of dexterity, blurry vision, loss of bowel control and general weakness and fatigue. This suggests that myelin is an important factor in allowing us make the most of our brain and bodily functions.
Practice Makes Myelin, So Practice Carefully
Understanding the role of myelin means not only understanding why QUANTITY of practice is important to improving your skill (as it takes repetition of the same nerve impulses again and again to activate the two glial cells that myelinate axons) but also the QUALITY of the practice. Similar to how the science of creativity speaks about idle time and not crushing through one task after the other, practising with a focus on quality is equally important.
As a young gymnast, my coach put a spin on the old phrase, and would always say: “Perfect practice makes perfect”. You got corrections on your training after every turn, so that you never spent too much time practising the wrong thing, as bad habits are hard to correct.
If we practice poorly and do not correct our mistakes, we will myelinate those axons, increasing the speed and strength of those signals – which does us no good.
The takeaway: practicing skills over time causes those neural pathways to work better in unison via myelination. To improve your performance, you need to practice FREQUENTLY, and get lots of feedback so you practice CORRECTLY and enhance the right things.

If you’re interested in learning more about myelin and skill acquisition, check out Daniel Coyle’s book The Talent Code and this Scientific American article “White Matter”

​
FOOTNOTES “Studies of adult brain plasticity have shown that substantial improvement in function and/or recovery from losses in sensation, cognition, memory, motor control, and affect should be possible, using appropriately designed behavioral training paradigms.” Brain plasticity and functional losses in the aged: scientific bases for a novel intervention
[2] “Myelin is a unique way to increase conduction speeds along axons of relatively small caliber … Myelinated nerves, regardless of their source, have in common a multilamellar membrane wrapping, and long myelinated segments interspersed with ‘nodal’ loci where the myelin terminates and the nerve impulse propagates along the axon by ‘saltatory’ conduction.” Rapid conduction and the evolution of giant axons and myelinated fibers.]
[3] “These findings show that LIF is released by astrocytes in response to ATP liberated from axons firing action potentials, and LIF promotes myelination by mature oligodendrocytes” Astrocytes Promote Myelination in Response to Electrical Impulses
[4] “Long-term training within critical developmental periods may thus induce regionally specific plasticity in myelinating tracts.” Extensive piano practising has regionally specific effects on white matter development