It’s technically the off-season, but if you’re hard core enough, you’ll still be able to play some golf. The general rule of thumb in golf courses during the off-season is that if there’s not snow or frost on the ground, the course is open. The trade off? You’ll probably have to play in some rather frigid temperatures. And that cold weather can have a small but significant effect on your game.


How much does cold weather affect your golf ball?Most golfers know the golf ball won’t fly as far in cold weather. But how much, exactly, does it impact your flight? Enter Andrew Rice, one of our GOLF Top 100 Teachers who, at his Coach Camp conference in 2018, conducted a series of tests on Trackman to figure this out. He determined that for golfers who hit their drives about 250 yards (with a ball speed of about 150 mph), they will lose about two yards on their drives for every 10 degree drop in temperature. On the flip side, golfers will gain about two yards on their drives for every 10 degree rise in temperature.

The distance increase/decrease will decrease the shorter the club, though. For a pitching wedge, you’ll only gain or lose about 1.3 yards per 10 degrees, according to the findings.

So, using Rice’s formula, we put together this handy little chart. Full disclosure, it’s not perfect because everyone’s distances vary, but hopefully it will help provide a general baseline for the next time you’re out there in the cold. 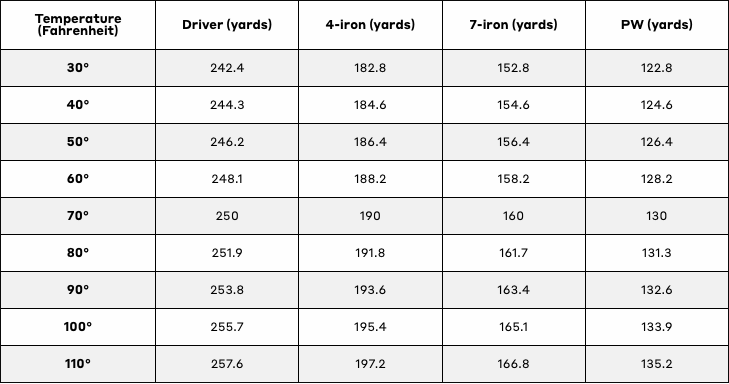