There is only one way to increase the distance you hit your metal woods or irons. A combination of increased club head speed and how solid you hit the ball on the center of percussion, a.k.a. "sweet spot", and the angle that you launch your shot at impact.
If each golfer focused on learning to hit the ball solid and in the "sweet spot" they would be amazed at how much distance would be picked up. Then to optimize their distance acquiring the ideal launch angle will be the icing on the cake in terms of achieving their optimum distance.
The average golfer’s problem is not so much a lack of ability as it is a lack of reliable feedback and then knowing what should be done.
My preferred order is Sweet spot – Launch angle – club head speed!
I believe the first place to start work on distance is by getting into a program of hitting the ball in the center of the club face. If the golfer hits the ball square in the middle most of the time this golfer then needs to learn how to swing the club faster without losing square impact. 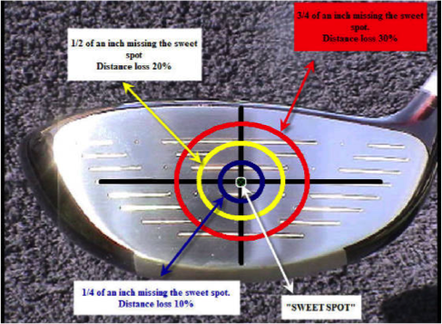 ​Center Hit – 258 yards
1/2 inch off center – 243 yards
3/4 inch off center – 237 yards
1 inch off center – 227
So contacting a golf ball an inch off the center of the clubface with a 100 mph swing speed, results in a 31 yard loss of distance!
Finding the Sweet Spot / The Moment of Impact
Focus on hitting the ball out of the center of the clubface more often (keep reading for details on exactly how to do this).
Let's use the example of being able to hit the ball 175 yards in the air with contact on the face of the club being 1/2" off the center each time. By increasing the miss of a center hit by only 1/4", the ball will gain ten percent in air yardage of 17.5 yards with the same club head speed or 193 yards in the air.
2.    CLUB HEAD SPEED
Studies show that for each mile an hour gained in club head speed results in the ball going 2.3 yards longer. A 5 mph increase will result in 11+ yards increase in distance. That is a huge difference on the golf course. Now a close second to that advice would be to speed up your swing at impact. That’s because for every 1 mph of swing speed you improve by, you’ll gain about 2.3 yards in distance.  So if you swing at 90mph at impact and you increase that by 10 mph, then you would have gained about 23 yards in distance!

Now imagine, combining swinging faster with hitting the ball in the middle of the clubface more often.

That’s a great combination, and I’m going to give you two things you can do the next time you go to the driving range to help you do that.
The first tip is to help you swing faster, and it’s really simple.
When you’re at the driving range, in between shots turn your driver upside down and swing it as fast as you can. Then carry that “speed” over to your next shot and feel the difference.
By doing that, it will force you to swing faster than you’re maybe used to – which is a good thing, because your mind likes to keep things exactly the same.
Now that increase in swing speed is only going to be of much use if you hit the center of the clubface more often.
To help you do that you need to get some feedback on where you’re hitting your driver.
But sadly, because the drivers these days can be so dead when you hit them, it’s tough to know when you hit it right out of the screws. However, it is doable if you increase your awareness.
And to help you do this I want you to get some impact tape and put it on your driver.
Then, hit your drives with your faster swing speed. After you hit each shot I then want you to predict where on the clubface your ball hit.
The strange thing about this is that often times awareness can be curative. For example, if you think you’re hitting the ball out of the middle of the clubface but 9 times out of 10 it’s on the toe you’ll naturally make corrections in your swing to hit the ball more in the middle of the clubface.
If you didn’t know this, of course you wouldn’t do anything different, because you wouldn’t know there was a problem.
But please remember this… you never want to think about impact or what you’re doing at impact.
Impact is not a position, it’s something you move through and you should not be thinking when you’re doing this.
So when you’re being aware of your impact ball position, do not try to hit the ball on the center of the clubface. Use observation and awareness to improve your results.
So there you go… use those two tips to help you hit longer drives and enjoy playing golf more