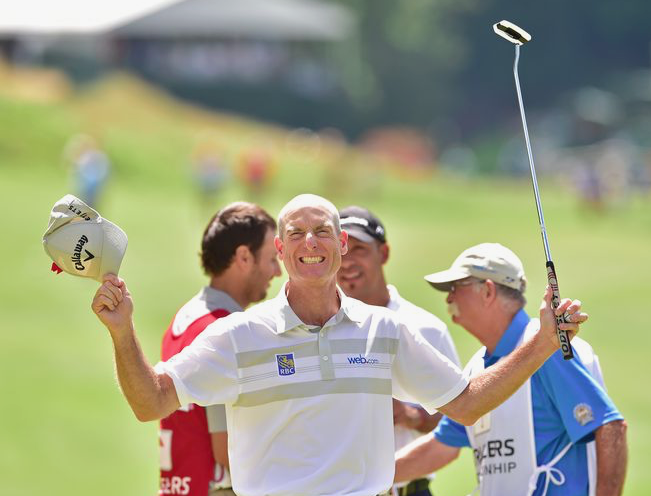 The record for the lowest 18-hole score in an official PGA Tour round is 58, and in the long history of the tour there have been 10 rounds with scores below 60. Here's a look at the record-low score of 58, and, in addition, all the golfers who've shot 59 on the PGA Tour.
The Lowest Round in PGA Tour History The best score for one round of golf in a PGA Tour tournament is 58. That score has been posted only once so far, and it was by Jim Furyk.
Furyk's all-time record round of 58 happened in the final round of the 2016 Travelers Championship at TPC River Highlands in Connecticut. It was Aug. 7, 2016, and Furyk's 58 was a 12-under score at TPC River Highlands. During that round, the golf course that was set up at just over 6,800 yards with a par of 70.
Furyk actually had a putt for a 57 on the final green, which he just ran past the hole. Furyk had 10 birdies and an eagle during the round, plus seven pars. He shot 27 on the front nine and 31 on the back nine.
And yes, Furyk won the tournament with that record-low round.
Note that Furyk's name appears among the list of golfers who've shot 59 on the PGA Tour, too. He is, so far, the only golfer with two sub-60 rounds in Tour history.
All the 59s in PGA Tour History An 18-hole score of 59 has been posted nine times in tour history. Here are the golfers who've shot 59 in a PGA Tour event—the golfers who shared the record for lowest-ever PGA Tour round before Furyk shot 58: Geiberger, Duval, Appleby, Thomas and Snedeker all won the tournaments in which they shot 59; Beck, Goydos, Furyk and Hadwin did not. Thomas, in fact, went on to post the lowest 72-hole score in tour history.
Geiberger and Goydos shot their 59s under lift, clean and place conditions.
Geiberger, Beck, Duval and Hadwin's 59s were 13-under par scores; Goydos and Furyk were 12-under par; Appleby, Thomas and Snedeker were 11-under par.
The First 59 In PGA Tour History Al Geiberger became the first golfer to shoot 59 on the PGA Tour during the second round of the 1977 Memphis Classic (what today is known as the FedEx St. Jude Classic) at Colonial Country Club in Tennessee.
Geiberger posted that score on June 10, 1977. He hit 14 out of 14 fairways and 18 out of 18 greens—ballstriking perfection. But it takes more than that to shoot a 59; you also have to make a lot of putts. And Geiberger certainly did that, too: He had 23 putts total, a number that included quite a few mid-range birdie and par putts. He also holed out for an eagle from off the green on one hole.
Even with lift, clean and place in effect, Geiberger's round was very surprising to his fellow competitors because Colonial Country Club was a very long course for that time (over 7,200 yards) and had bermudagrass greens, which can lead to "bounciness" in putts.
While preferred lies were in place that day, Geiberger told Golf Digest in 2012 that he had no recollection of ever improving his lie during the round.
And Geiberger closed out the round in style, birdying the 17th and 18th holes to record the first-ever 59 in PGA Tour history. The lowest other score shot during the same round as Geiberger's 59 was a 65 by Raymond Floyd.
Whose Record Did Geiberger Break? When Geiberger set the new PGA Tour scoring record in 1977, he broke the previous record of 60 that was shared, at that time, by seven golfers.
The first golfer who shot 60 on the PGA Tour was Al Brosch at the 1951 Texas Open. And the most-recent, prior to Geiberger's 59, was Sam Snead's 60 at the 1957 Dallas Open. In between Brosch and Snead, Bill Nary, Ted Kroll, Wally Ulrich, Tommy Boltand Mike Souchak had also recorded 60s, so they all shared the record that Geiberger broke.
Note that it was 26 years from the time of Brosch's 60 until Geiberger set a new PGA Tour scoring record in 1977. It took even longer than that since for Geiberger's 59 to be bettered by Furyk.
Has Anyone, Anywhere Shot Lower Than 58? Yes! There are reports of many golfers scoring 57s and even lower, but none of those rounds have happened on the PGA Tour, or any of the world's other major golf tours.
However, the lowest-known 18-hole score was shot by a golfer who later played on the PGA Tour and Champions Tour. That record plus other rounds recognized by the Guinness World Record gatekeepers are described in the article, "What is the lowest 18-hole golf score ever recorded?"